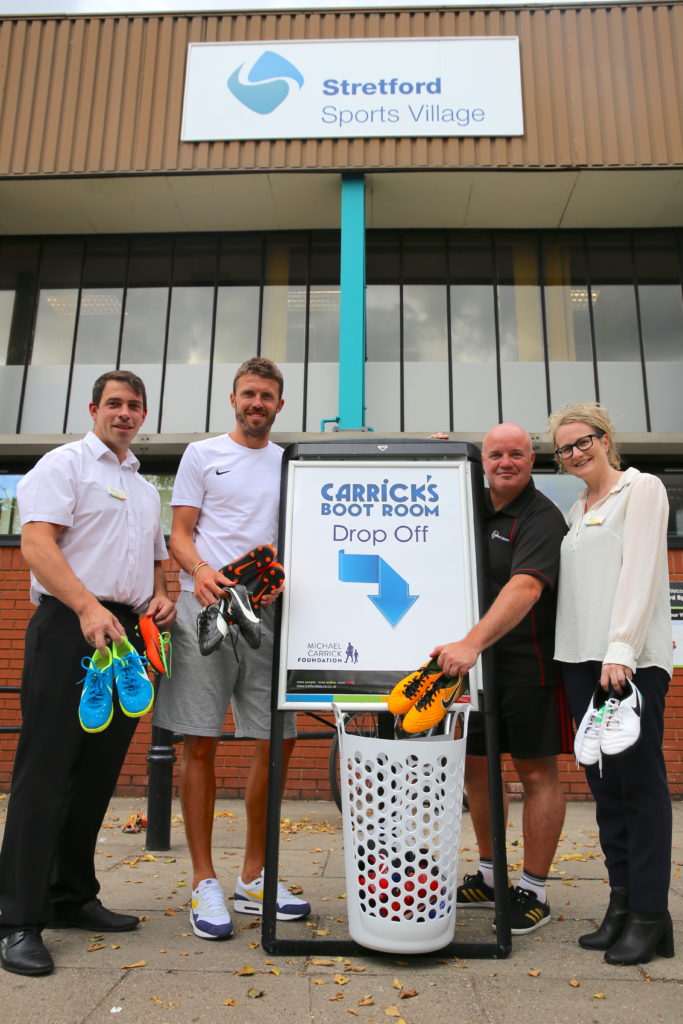 Throughout October, people are invited to donate their unused or outgrown football boots and astro trainers at designated drop off points located across Trafford, Manchester, Stockport and Tyne and Wear.

The 2019 Boot Room Campaign follows an extremely successful launch last year, in which more than one thousand pairs of boots were donated.

Michael Carrick Foundation has launched its annual campaign, Carrick’s Boot Room, in a bid to ensure youngsters have access to the equipment they need to be able to take part in sport and reach their full potential.

Running throughout October, the football boot amnesty, supported by Trafford Leisure, MLILY, Manchester United Foundation and Newcastle United Foundation, plans to reach more children than ever before. During the campaign, the Foundation is calling upon people to find their unwanted or outgrown football boots and Astro trainers and donate them at one of the thirty-two designated drop-off points.

The 2019 Boot Room follows an extremely successful launch last year, in which more than one thousand pairs of boots were donated. Building on this, the Foundation has increased the number of drop off locations in Manchester, Trafford and Stockport, whilst also expanding into Tyne and Wear, another place close to Carrick’s heart.

Talking about this year’s Boot Room, Michael Carrick commented: “The Foundation is really excited to be able to build on last year’s success here in Manchester and expand the campaign to Tyne and Wear. It is essential that inadequate footwear is not a barrier to participation in sport and any donated boots really will make a huge difference to the children who need them most.”

Every pair of donated boots will be thoroughly checked, cleaned and re-laced, ready to be redistributed to children at community football sessions, schools and grassroots clubs.

Reflecting on last year, Carrick said: “We were humbled by the sheer volume of boots kindly donated last year and were thrilled to be able to gift a pair of ‘new to you’ boots to every participant at our Manchester funded sessions. However, with children outgrowing their boots every six to 12 months, we wanted the campaign to become an annual event and ensure that every child can continue to take part and enjoy the sport with their peers.”

Jo Cherrett, COO Trafford Leisure, commented: “We are delighted to be supporting the Michael Carrick Foundation again this year and I am grateful to Life Leisure, MCR Active and Altrincham Football Club in helping to increase the number of locations available for donating boots. We both believe that all children, no matter their background or ability, should have access to the correct equipment they need to be able to participate and to be the best they can be. Donating boots is a simple and effective way of getting the appropriate footwear to local children and ensuring their experience of sport is a positive one. We look forward to collecting and storing the boots, as well as subsidising the marketing and promotion of the Boot Room Campaign on behalf of the Michael Carrick Foundation.”

Michael Carrick is one of the most decorated English footballers of all time and has 701 career appearances for club and country. Carrick is best known for his twelve-year career at Manchester United and is now part of the coaching staff at the Club. Michael Carrick Foundation was set up in 2017 when Carrick made it his mission to help provide youngsters with empowering opportunities where they can feel safe, valued and inspired to achieve their best.

You can drop your boots off at:

Benefits of physical activity on the body

Get the official Trafford Leisure app!

The fastest and best way to access our services.
Continue